The closing game of the Junior Final Fours contained high tension and fine margins as Myerscough avenged last season’s defeat in the U18 Men’s Playoff Final to go one better this time round. 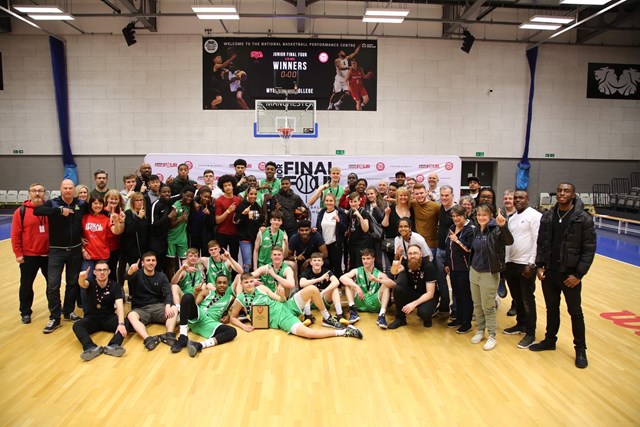 Nearly a year ago to the day, Myerscough had to watch Manchester celebrate following an overtime win, while back in December Haringey beat Myerscough in the National Cup semi-finals.

Myerscough coach Troy Culley said: “There’s no easy way to go about it. Losing by two to Manchester last year hurt. Losing by two to Haringey in the Cup semi-final hurt. That’s two games that we’ve lost by two points on one possession. But it still comes down to the end and getting it done.

“Sometimes you have to win ugly. We had a game plan coming in and we knew if we stuck to what we said it’d make things difficult for Haringey and put us in a position to compete. The guys saw it through, and in games like today you just have to find a way.

“But this is massive for the programme and the guys. It’s a big win for the Academy and it’s a statement, and it’s deserved. It’s a testament to the resilience we’ve shown all year and our ability to cope with pressure. We always get our opponents best effort when we step on the floor, which is incredibly complimentary, but it pushes you to compete at a different level consistently.”

Lewis McGlasson said: “We were just trying to calm everybody down [at the end of the game]. Execute some plays for the stretch to win the game. That’s what we did. There was no way we were going to lose that game two years in a row. I just wanted to help my team get the win."

Meanwhile, Myerscough continued its dominance in the AoC Sport Premier Cup and Knockout Cup competitions, winning both on Wednesday for a third-straight year.

The  Academy backed up its stranglehold on the Premier Cup with a comfortable 81-58 win over Haringey.

Myerscough then came through with three seconds remaining to lift Myerscough to a 65-63 win over Richard Huish in the Knockout Cup to complete the three-peat.

“We have certainly had a nice grip on the AoC competitions over the last few years,” said Myerscough head coach Neal Hopkins. “We are really committed to winning -- sometimes it doesn't go our way -- but fortunately, we have been able to really make them our own.”

The wins secured the second and third national titles that Myerscough claimed over a four-day stretch following its triumph as Under-18 Men’s National Champions on Sunday.

The victories for Myerscough College’s Basketball Academy add to the Basketball England U19 Men’s Dynamik National Schools Championship in March.