A Myerscough College apprentice has won a place to represent the UK at WorldSkills Kazan 2019 this summer.

Sam Taylor has been named as being among the UK’s best and brightest young skilled apprentices and students after being selected to represent all four nations in Team UK at the ‘Skills Olympics’ in Russia.

19-year-old Sam Taylor was invited to compete for a place in Team UK for WorldSkills Kazan 2019 after excelling in the WorldSkills UK National Competitions. Sam was chosen following a qualifying event at Nottingham College, where he was up against other apprentices in the Landscape Gardening category. Sam is just one of two landscaping apprentices to make the squad.

More than 30 young professionals from a range of sectors have cleared the highest hurdle in a two-year challenge to be the best in the World.

These skilled young people have already triumphed in regional and national competitions and had one more momentous obstacle to overcome at Team Selection events the length and breadth of the UK.

The results were revealed at Loughborough University which has a strong association with training Team GB for the Olympics.

Team UK will represent the United Kingdom at The WorldSkills Finals in Kazan, Russia in August (22-27). 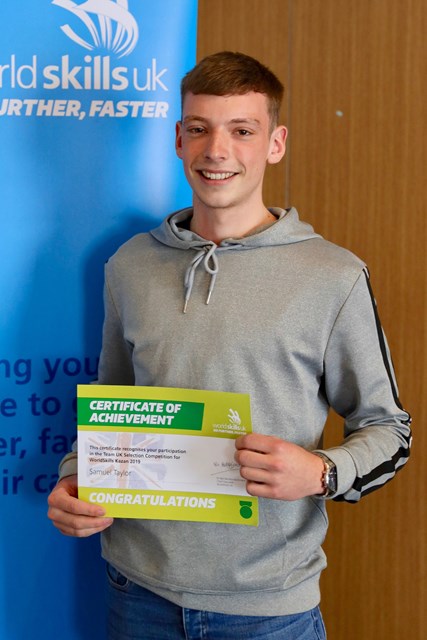 Neil Bentley-Gockmann OBE, CEO of WorldSkills UK, which selects and trains the team and uses their successes to promote skills across the country, said: “Think Olympic Games – but much more important to the economic future of the United Kingdom.

“This is a life-changing opportunity for all those involved.

“I couldn’t be more proud of these extraordinary young people who will be on the plane to Russia.  They have worked tirelessly for weeks, months and years to be the best – they are a shining example to the next generation – let’s celebrate their spirit, commitment, and success.

“We are not only giving young people the opportunity to reach their full potential but we also believe that, working with them, we can transfer the insights gained from competing against other countries into the wider UK economy, driving up training standards for young people to world-class levels, giving a much-needed boost to productivity.”

More than 60 countries are sending elite teams to the Tatarstan Capital, 800 km east of Moscow - to do battle and go for bronze, silver and gold in 56 different skills disciplines.

The event, dubbed the ‘Skills Olympics’, which takes place every two years, will be shown live on TV and streamed around the World (including the UK) – and change the lives and careers of those that compete.

At the last WorldSkills finals (2017) in Abu Dhabi, Team UK finished in 10th position and is hoping to replicate or better the result.

Back in October, Sam was one of just 22 people in the UK chosen to compete at the EuroSkills event in Hungary, an international event to showcase the finest young skilled people in Europe. Sam was only one of two people selected for the squad to compete in the Landscape Gardening category, with Team UK up against more than 500 other competitors from 27 other nations.