An ambitious Myerscough College equine student looks set to take the horse racing world by storm after fulfilling her dream of becoming a jockey. 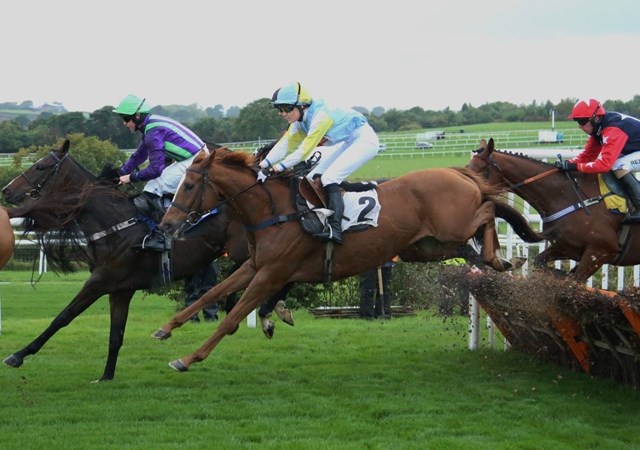 Charlotte Jones graduated with a first class BSc in Equine Science in the summer and is now part of the team at the renowned James Moffatt Racing Stables in South Cumbria. She has already taken her first steps as a competitive rider with two races already under her belt, including guiding Smart Ruler to a mid place finish at the meeting at Carlisle earlier this month.

21-year-old Charlotte, who hails from Barrow, has been riding since she was six-years-old and after catching the equine bug by going to pony clubs and a local riding school, as well as having her own horses, came to Myerscough College initially to study a Level 3 BTEC Extended Diploma in Equine Studies, before moving on to a full honours degree.

Charlotte said: ‘’I thoroughly enjoyed my time at Myerscough and would recommend it as an equestrian college to anyone. The opportunities are endless if you embrace every aspect of what is offered to you and the staff are very knowledgeable and helpful.

‘’It is a very professional environment which sets you up well for working within the equestrian industry in later life.

‘’I started at Myerscough when I was 16 and after as I got older I was really able to embrace college life, but this was not always fun riding the next morning when you were so tired from going out!

‘’My favourite parts were always riding and I'd take every chance I could to ride and take jumping lessons, they were always fun with lots of challenging activities. I also enjoyed the scientific lessons, and when I started my degree I further developed my interest in areas such as fitness and exercise physiology, and I knew I wanted to pursue a career in the racing industry.’’ 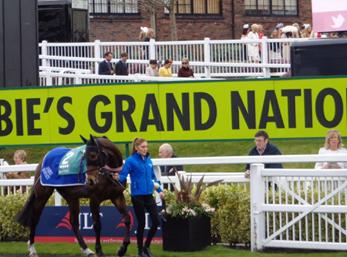 Charlotte with Altruism at the 2016 Grand National Ladies Day

It was a busy few years for Charlotte. As well as studying for her degree, she also took further exams to become a qualified instructor, as well as being part of the inaugural Myerscough riding team in the competing in the BUCS (British Universities and Colleges Sports) league against other colleges and universities. She also presented dissertation research at the International Society of Performance Analysis of Sport (ISPAS) conference, and is hoping to get the research published in the near future.

Since graduating this summer she’s gained a full time position at James Moffatt Racing, where she’d already worked part-time during her studies.

Charlotte said: ‘’I came about the role thanks to my tutor Eleanor Boden, who was also my physiology teacher. She helped out at Cartmel Races during their racing days which is my local track and she asked if I wanted to help.

‘’While I was there I was given his number and he invited me up one Saturday morning to ride out and help out to see how I worked, and thankfully wanted me to start right away.

‘’I was nervous as I’d never sat on a race horse before, even to this day it is overwhelming as I still have only been riding them just over a year and now I'm in races.

‘’In July this year I went on my conditional licence course which was an experience in itself. The fitness test is like nothing I’ve ever done before even though I considered myself relatively fit.’’

Charlotte’s many duties at the stables include caring for seven horses but she hopes to return to the track soon in other competitive races: ‘’It’s very nerve-racking as racing is such a public sport with lots of people involved. My first ride was amazing and so surreal, especially finishing third in a ladies race against some of the best women in the country.’’

‘’I suffered with a slipped saddle in my second race which was scary but I still managed to get round in one piece. These things happen and it hasn't knocked my confidence. If anything it has made me more determined to get back on the track.

‘’I have been having lessons from my new coach, Brian Harding, who is still a jockey himself and who has ridden in many Grand Nationals. I think while I am young then I would like to make a career of being a jockey. I would also like to promote women in racing and maybe one day use my degree to work in the British Horse Racing Authority (BHA) and maybe undertake a PhD. In the meantime I'm happy riding as long as I'm continuing to achieve and keep improving. I'm not happy staying in one place and level with my ability so won't settle until I'm the best I can be.’’

In a heavily male dominated industry, where female jockeys account for just a fraction of rides, Charlotte says she thinks women can compete on equal terms with men in the saddle: ‘’The sport is very competitive with so many young people being born into it which has a huge advantage.

‘’Some of these riders are jockeys from the age of 16 so I probably have a slight disadvantage but I’m not going to let that stop me. Even though the sport is predominately male I’m going to strive to show that women can be just as good too. It’s a bit intimidating being male dominated but the majority are very professional about their job and are there to ride, as is everyone.

‘’I like to take one step at a time so although I would of course love to be the first woman to win the Grand National. my short term goal is to gain some more experience to be able to ride a winner,  then further down the line becoming the leading female jockey in the north and be within the top 20 jockeys in the country in a few seasons time.’’

‘’I would like to keep improving my riding and ability to work with horses to get the best out of them too.’’

A spokesperson for James Moffatt Racing said: ‘’Charlotte is an excellent rider. She is always full of new ideas and is dedicated and hard working. She is a great addition to the team.’’