This week marks the 20th anniversary of the Queen’s visit to Myerscough College, to officially open a new building at the heart of the Bilsborrow campus.

On Friday, July 23rd, 1999, Her Majesty The Queen, accompanied by The Duke of Edinburgh, visited Myerscough to unveil what was at the time, the college's newest building, the Fitzherbert-Brockholes Building. It was her second visit to Myerscough, after opening the campus almost thirty years previously, in 1969. She has since visited Myerscough again, in 2015.

The Fitzherbert-Brockholes Building cost £2.5million to construct, and was home to a library, student services and support, and a rural business centre. Today, the building is a learning resources centre, which still includes the College’s main library, as well as an I.T centre and the campus’s main reception. 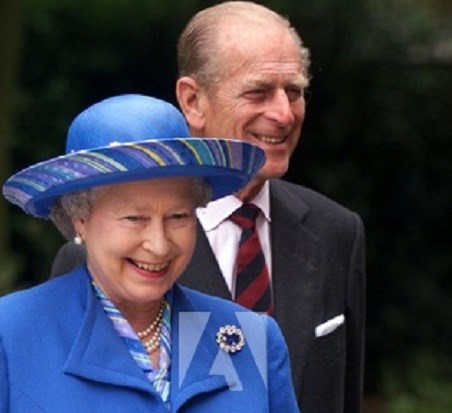 The building’s name is very significant in Myerscough’s proud history. The Fitzherbert-Brockholes Building is named in honour of W.Fitzherbert-Brockholes, who was on the committee overseeing the inception of the college, under the former name of the Lancashire County Institute of Agriculture, back in the 1890s.

On the day of the visit, after arriving, they met college staff, as well as representatives from companies and organisations closely linked with the college, before The Queen officially unveiled a commemorative plaque to mark her visit. 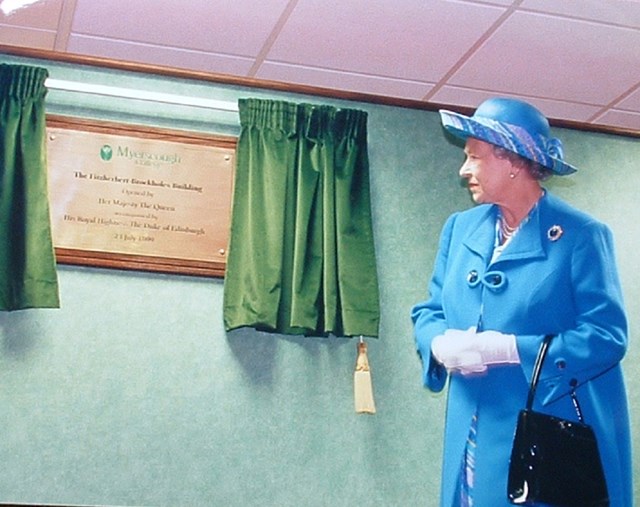 The Queen toured the second floor of the learning resources centre where there was an exhibition showing the ways in which each of the College's programmes collaborates with industry. At the same time, The Duke toured the first floor and saw demonstrations by students working in each of the programme areas. He was treated to displays from students involved in subjects including golf, dog grooming and trout fishing, and a demonstration on the use of information technology. 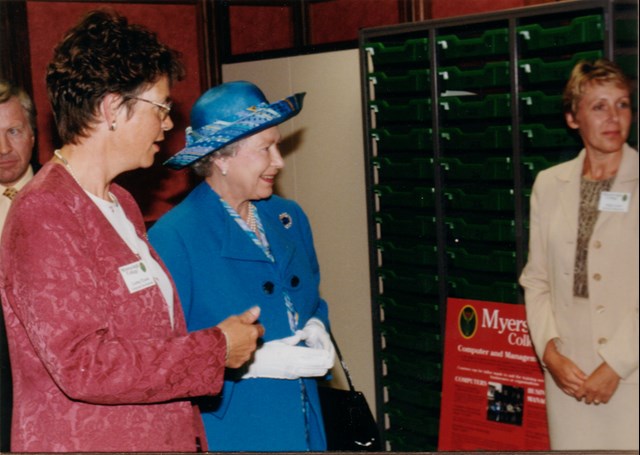 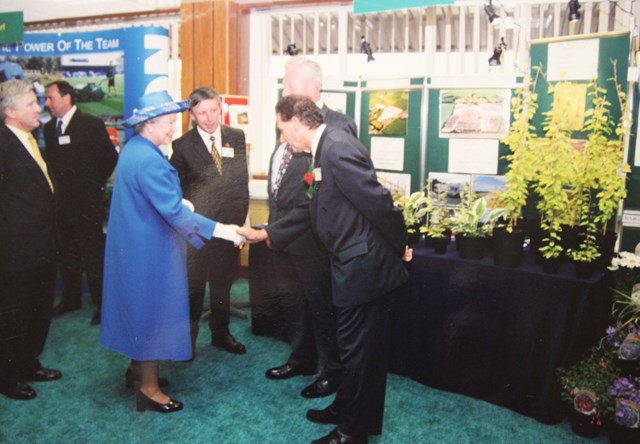 The Royal party then moved to the ground ﬂoor, where they were introduced to two students — Timothy Oakes [HND in Ecology and Conservation Management], who has been awarded the Duchy of Lancaster Scholarship, and Jean Jones [National Diploma in Agriculture] who has received a grant from the Duchy of Lancaster Bursary.

The Queen was also presented with a posy of flowers designed and made by Samantha Mycock, a student doing the HND in Commercial Floral Design. 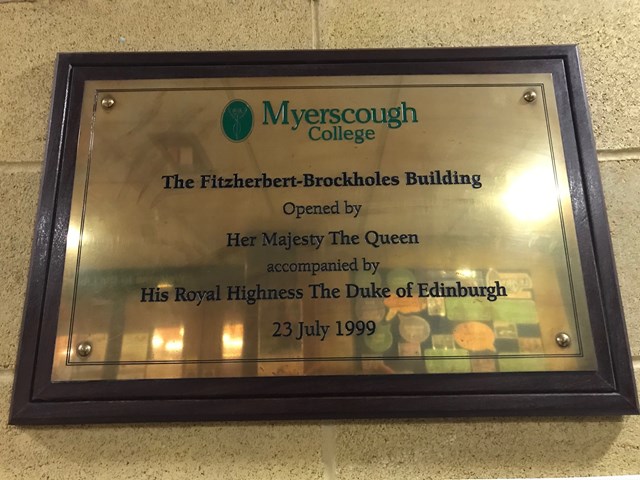 Jon Humfrey is Myerscough’s Library and Learning Resources Manager, and back then was part of the team who designed and built the ground floor of the new building.

He says: ‘’It was a great day. When I trained to become a Chartered Librarian and took my first professional post here at Myerscough, I had no idea that it would lead to being able to participate in the design and build of a brand new library, but also to have the Queen and Duke of Edinburgh come and open it along with the rest of the building.

‘’I would certainly say it is still one of the main highlights of my career which I will take long into retirement in years to come.

‘’Ahead of the visit, all of our photocopiers, the photocopy card vending machine and all our desk drawers were sealed with a wax seal, so that on the day the security services could come in the library and check that all the seals were still in place and that no one had put anything in any of the drawers in the meantime.

‘’Police dogs went all round the library on the morning of the visit, while I remember a frogman walked past my office window, dressed in a full diving outfit! There was also a rumour that a Royal toilet seat had arrived in advance and been installed in the event of it being needed – whether that throne still remains somewhere in College or was sent on somewhere else is unknown!

‘’At the time the FHB Building had a large electric rotating front door. However even in its early days it was quite unreliable and would stop working leaving people having to push it round manually, so on the morning of the opening, the door was switched off and a member of staff was positioned the other side of the door so that they could push it round manually at a steady rate so that the Queen and Duke could enter the building in a dignified manner!  This was quite a big responsibility – too fast and they would shove from behind and too slow might have resulted in a bumped nose!

‘’The Queen and the Duke of Edinburgh arrived by car and came and stood on a small platform near one of the pillars at the front of the library just the other side of the service desk and the library staff were allowed to stand behind the desk, so we got an excellent view of the unveiling of the plaque.

‘’After the opening ceremony in the library, the Royal party went onto the upper floors of the FHB building where there were displays from various departments, students, teaching staff, etc.  The Duke of Edinburgh was very keen on meeting everyone and kept darting off to see cleaners and students, much to the consternation of his security!’’ 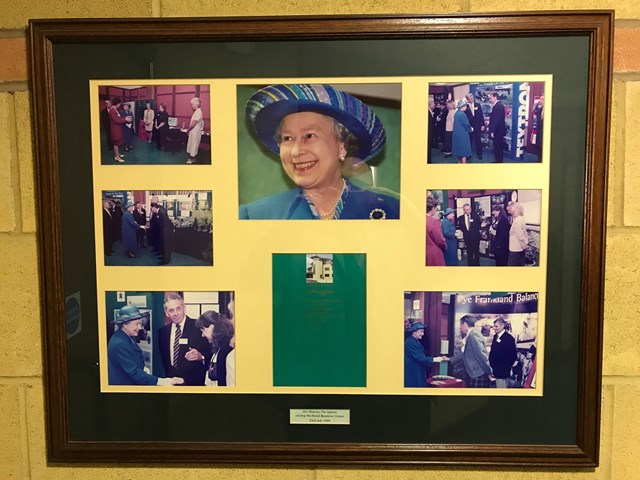 During the visit, Myerscough presented The Queen with a dawn redwood (Metasquoia Glyptostroboides) conifer. The species of tree was originally planted at Myerscough’s former Hutton campus back in 1953, to commemorate the Queen's Coronation. The tree was meant to be planted in Windsor Great Park, but Her Majesty kindly suggested that it should be established within the grounds of Frogmore House instead, close to Windsor Castle.

Frogmore has been in royal ownership since the sixteenth century and members of the Royal Family enjoy the privacy of its gardens when they are at Windsor. It was a great honour for the College to be permitted such a prestigious location for the gift, and so a few months later, a small party of staff and students travelled to Windsor to plant the tree. They were met by Mark Flanagan, the Keeper of the Gardens at Windsor, and Neil Dodds, a former Myerscough horticultural student who worked at Windsor Great Park when a student and returned there when he qualified.

Lorna M Tyson MBE, is Myerscough’s former Director of Business Development, and remembers the Royal visit fondly: ‘’We established a Rural Business Centre on the top floor of the Fitzherbert Building - this was a new concept and probably the first of its kind based at a land-based college in England. Its aim was to support rural businesses with business and skills development. I was the manager of this unit when the Queen came to open the building and had the privilege of showing her around.

‘’We had a series of displays from businesses in different sectors and their owners and staff for the Queen to meet, in addition to some of the staff involved.

‘’The day was really exciting and special and the culmination of many weeks of preparation - there was a small brochure produced for the day, and we even had a rehearsal using two actors who played the role of the Queen and Prince Philip prior to the event! Myerscough staff worked closely with the Royal staff and police in preparation for the visit.

Several years later the Rural Business Centre later moved to a purpose built building on campus, which incorporated a Rural Business Incubator to provide support and guidance to new companies. The ‘RBC’ remains a key part of college life today. 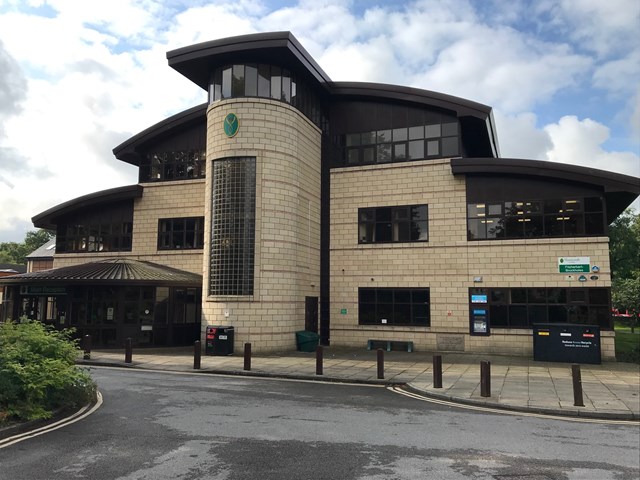 (Above: The Fitzherbert-Brockholes Building today)

Thomas Bowring was the Chairman of the College Governors. Speaking at the time, he said: “It was a great honour to welcome The Queen and The Duke of Edinburgh to Myerscough. Her Majesty opened the Myerscough campus exactly thirty years previously, when the College moved to its present site, so we were delighted show The Queen the tremendous expansion and diversification that has taken place over the years."

During the Royal couple's two-day tour to Lancashire, they also visited Morecambe, where they unveiled a statue comedian, Eric Morecambe.

In addition, the Queen’s visit in 1999 also coincided with the awarding of the first ever Myerscough College Honorary Fellowships. They were given to Professor Donald Broom - Emeritus Professor of Animal Welfare at Cambridge University, and Ian Parsons LVO - The Duchy of Lancaster's surveyor of lands, as he was recognised for his association with the work of Myerscough College over many years.