A recent Myerscough College cricket student has become just one of 41 female players in the country to sign a full-time professional contract.

Hannah Jones has put pen to paper on a domestic deal with Thunder - the North West's regional side. 21-year-old Hannah, who is a left arm spin bowler, has been signed after impressing with the ball in this summer's Rachael Heyhoe Flint Trophy, where she took four wickets in the tournament and caught the eye with an economy of just 3.16.

Hannah completed a Level 3 BTEC Diploma in Cricket Studies, studying the programme based at Myerscough’s centre at Emirates Old Trafford. She was the first female to represent Myerscough’s first XI and one of only two students to take a hat-trick. Hannah has represented the Lancashire one-day side in both 2018 and 2019. 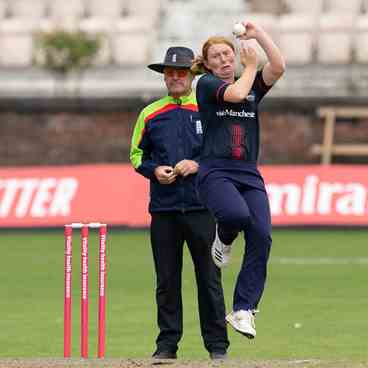 ECB Managing Director of Women’s Cricket, Clare Connor, said: “We’re delighted that these 41 young women are able to call themselves full-time professional cricketers and we wish them every success.

“The introduction of these 41 professional players is the most significant step forward for the women’s game in recent years.

“In terms of the health of women’s cricket in England and Wales, we cannot overestimate the importance of these 41 players having the opportunity to train and work on their skills full-time, with access to high quality coaching and facilities across the eight regions.

“Today’s news is not only wonderful for the players themselves, but it represents a step change for our whole domestic game and for young girls who will now be able to see more opportunity and aspiration in front of them.

“When you add in the profile opportunity of The Hundred next year, the landscape looks even more exciting.’’