The newly purchased Opel Corsa E rally car was put through its paces for the first time on the Three Sisters circuit.

The car was put through its paces by lecturers Bart Lang and Phil Boyle, while students got the opportunity to see the new vehicle in action, learn about the new technology and how to safely work on an electric competition vehicle.

Phil said: ‘’The car was delivered from Opel Motorsport and is currently the only one in private ownership. It has been sitting pretty in our workshop since it was revealed at last month's Legend Fires North West Stages. This was its chance to show us what it could really do.

‘’Myerscough is committed to developing the technicians of the future and currently the direction is electric. 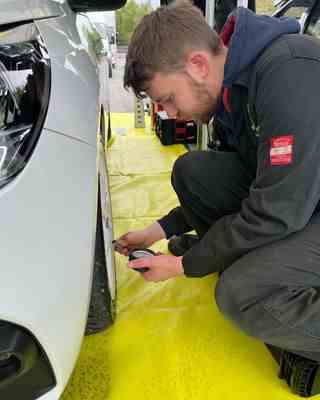 ‘’Our lecturers Phil and Bart were really pushing it to the limit. It was another great day and insight into what the future could entail for motorsport engineers.

‘’Big thanks to Myerscough for the opportunity to work with these amazing vehicles.''

The brand-new Opel Corsa E rally car is the future of rallying, with the vehicle being completely electric and producing no emissions. It is also the only example in private hands in the UK, having been built by Opel Motorsport Germany and imported directly to Myerscough College. The car boasts a power output of 100KW (130BHP) and has 260Nm of torque. The fully charged batteries can offer a range of over 200 miles.

The car was put on display in the service park for the recent North West Stages rally, and despite the other 125 cars on campus, one TV commentator was heard to describe the Corsa as ‘The most special car here’. 2019 European Rally Champion, Chris Ingram described it as an ‘awesome piece of machinery’.

This is the most recent addition to the College’s electric fleet, having been funded by the UK Government Skills Accelerator Initiative. It joins our BMW I3 hill climb car, Peugeot E Traveller service van and our Fiesta ST-line mild hybrid which is in the process of being made in a full rally car.

With the move towards a greener future, Myerscough College and University Centre is proud to be leading the way in training the next generation of motorsport technicians, with a team of experienced staff and fleet of electric vehicles proving to be the perfect training ground for them to learn their trade.

Myerscough College and University Centre is part of a £1.3million project designed to train mechanics how to repair electric and hybrid vehicles.

The Lancashire Automotive Skills Accelerator Project is funded by the Department for Education, which will bridge the skills gap in low-carbon vehicle mechanics.

The scheme aims to create low-carbon skills centres across the county, providing significant investment in cutting-edge technologies and upskilling teachers to ensure that study programmes meet the needs of employers and the industry.

The project also aims to support the Government’s commitment to withdrawing the sale of new petrol or diesel cars in 2030 as part of the UK’s net-zero targets, by working with dealerships and independent garages to train the employees of the future in the service repair and maintenance of electric and hybrid vehicles, motor sport, plant vehicle technology, battery technology and charging infrastructure.

A Lancashire Independent Garage Network will be established to support businesses in the sector with skills and guidance on how to meet the future industry demands for such vehicles and to adapt their business for growth.