The College was honoured that the Queen accepted a formal invitation to open the site. At 3.40pm, Her Majesty arrived to be greeted by dignitaries and College staff, before touring the library, unveiling an official plaque at the Lecture Theatre, and then viewing a display of College work.

Click here to view our gallery of photos from the day

The College had of course already been in existence since 1894, and by the late 1950s, courses in a range of land-based subjects were already being taught at the then main site at Hutton, and a smaller centre at Winmarleigh Hall.

In the early years of the 1960s, more than 14,000 part students had enrolled with the Institution, while full time courses also remained oversubscribed. There was a clear need, and demand, for expansion. The main driving force behind the move to the Myerscough site was Frank Peregrine. Frank has been with the Institution since 1945, was Vice Principal in charge at the Winmarleigh site, and had seen teaching grow and grow over the years. He oversaw the whole operation, and became Principal in 1968, a year before the move was completed. 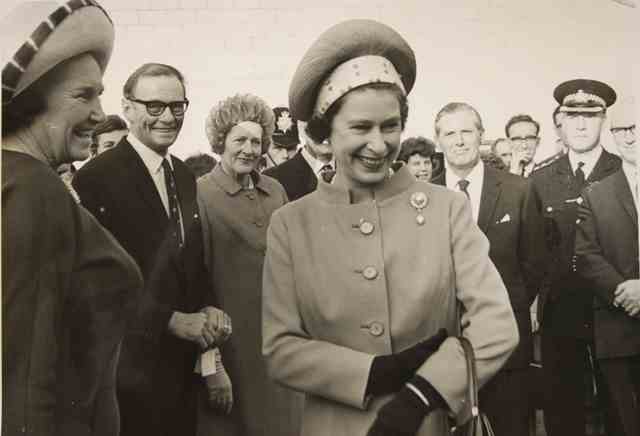 Several sites were looked at, before Lancashire County Council bought the freehold of Myerscough Hall and Myerscough Hall Farm, and the leasehold on Myerscough Lodge Farm, in 1962. The aim was to develop the sites, totalling 531 acres, into a single centre, large enough to cope with the demand, both current and future, for land based education. Work began and it would take a further seven years before the site was operational.

By late summer, 1969, the Myerscough site was ready to start accepting students, and initially offered a number of full time courses. These included a two-year National Diploma in Agriculture & Dairying, as well as one-year National Certificates in this, Amenity Horticulture & Poultry Practice. A host of part-time courses were also available in this areas plus things like Agricultural Engineering. Almost 900 students signed up, including, for the first time, people from overseas.

At the time, the college was the only one in the country permitted to offer both a Higher and an Ordinary Diploma in Agriculture, meaning demand was high. These new courses would be based at the new site, while Hutton would accommodate two-year dairy and one-year courses in agriculture, dairy and poultry, while Winmarleigh focussed on part-time courses.

The Lancashire College of Agriculture accepted its first full intake of students at Bilsborrow in September, 1969. Initially, the college catered for 127 residential students, with two storey ‘study bedrooms’ built in such a way to create a ‘village green’ feel. This original block is still in use today. With the College based a considerable distance from significant town centre life, particularly entertainment, a clubhouse was built comprising of a bar, games room, TV room and a space for what was described as ‘impromptu discotheque dances’. The main Lecture Theatre also remains in daily use today. The dining room completed the student facility. Following the building of a modern restaurant complex a few years ago, the original diner was demolished, but the remainder of the buildings are still operational.

The ‘teaching’ part of the site was substantial too. There was a modern, two storey library, a laboratory complex for scientific research, and a sizeable teaching block was added soon after, which still stands today. There was an agricultural machinery workshop and store, while the farms were split into two purposes – one for teaching and one for commercial use. The Myerscough Hall building was demolished and an administration block, still in use today, was built.

The architect for the project was a Mr Eric Hart. He decided that most of the buildings would be constructed using large white ‘breeze blocks’ and dark roof tiles. The aim of this was to blend the buildings into the countryside surroundings as much as possible. As many trees as possible were also left on site and a scheme to plant more introduced.