A University Centre Myerscough graduate is aiming to be become one of just four specialists worldwide to hold a doctorate in farriery science. 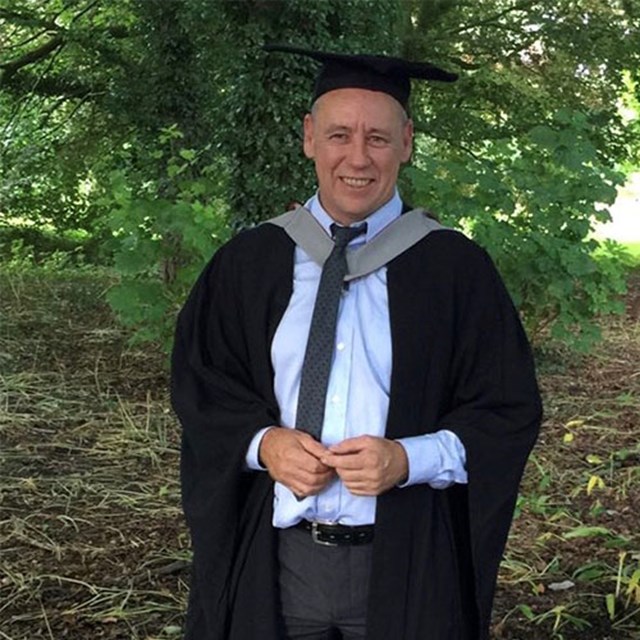 Norman Johnson is currently working towards the little known qualification and once complete, the 53-year-old will become one of the world's only PhD qualified experts in the sector. Norman first got the idea for doing the PhD whilst studying for a a higher education diploma and then a full BSc honours degree in Farriery Science at Myerscough College.

When Norman discovered after graduating that he could study for a PhD in Farriery he jumped at the opportunity.

Norman said: "I did not originally think about doing a PhD but, having done well with the BSc (Hons) course at Myerscough and having enjoyed the experience, I was hooked on the idea of doing more research into farriery as a subject.

"I was aware that it is very unusual for farriery to be studied at this level but it seemed very much like something I needed to do."

Norman begun his career with horses working for 15 years at in the racing yards in Newmarket, servicing around two hundred horses for a number of high-profile racing trainers. Also working with dressage and eventing horses, as well as polo ponies, he soon discovered that farriery was an area that he wanted to specialise in.

Norman will continue studying at the University Centre Myerscough while he completes his PhD with UCLan.

Norman explains: "The hoof capsule of the horse is a very intricate, if not amazing piece of engineering. It carries half a ton of horse at speeds over 40mph and therefore is subject to huge stresses.

"It deforms elastically at every stride, but any slight imbalance can cause plastic deformation because of its repetitive nature resulting in potentially severe damage to the hoof over time.

"The farriery industry is crying out for some injection of science, and with this particular course of study I feel that I may hopefully be able to make a positive difference to the sector in the future with the work I am doing."

Norman hopes to follow in the footsteps of renowned farrier, and Myerscough College Honorary Fellow, Dr Simon Curtis, and is one of just three specialists currently world wide known to have a PhD in the area.

Farriery is an ancient craft that dates back to the days of the Roman Empire. Modern farriers must have knowledge of the anatomy of the horses' feet and legs, be able to work alongside veterinary surgeons, manage and handle horses, understand and meet the needs of clients and successfully run their own business.

Norman adds: "My hope is with the completion of the PhD I will be to try to help educate and more importantly inspire others to become involved in research which is such a desperately needed area of the profession."

Mick Cottam, Head of HE at University Centre Myerscough, said: ''As a major provider of farriery courses in the UK, Myerscough plays a key role in training the next generation of farriers, to ensure standards within the industry remain as high as they can be.''

''Despite being an ancient craft, farriery is constantly evolving, and remains a vitally important part of the equine industry. Norman's research is sector leading and along with similar work undertaken by Myerscough Fellow, Dr Simon Curtis, will ensure equine science remains a key part of the industry's thinking. We wish him all the best in his work.''