A former Principal of Myerscough College has been fondly recalling his memories on the 50th anniversary of the official opening of the Bilsborrow campus by Her Majesty, the Queen.

On October 17th, 1969, the Lancashire College of Agriculture, as Myerscough was then known, was unveiled. It was a state-of-the-art campus, with emphasis on giving the student maximum value for their education in a rural setting, and with the ability to expand the site in future years.

Tony Fox is one of the most important people in the history of the College, with an association spanning across five decades. As a teenager, Tony initially was a student at the College’s former Winmarleigh campus, and in 1961 returned as a lecturer with the College. In 1968 he was appointed Vice Principal, a position he held when the Queen officially opened the College’s new Bilsborrow campus. He would go on to succeed Frank Peregrine as Principal in 1985, retiring in 1997.

Now in his 80s, we were delighted to welcome Tony back to the campus, and even into his former Principal’s office, to share his memories of the day of the Queen’s visit, and the early years of the Bilsborrow campus.

Tony said: ‘’It was a great day. We found out in the summer that she would be coming, and so the biggest job was getting everything ready. The security was very high level, including having snipers in the trees, and officials came to my house on campus to check there was nobody in there and carry out all sorts of checks. The county council were in charge of it all, so it was all run from county hall, with lots of council officials in attendance.

‘’It was a very nerve-wracking occasion. I didn’t expect I would meet her personally, but we had put on a display upstairs in the lecture theatre which she came view. We were asked to line up and myself and the Student Union president explained what was going on. It was a very thrilling day, something quite out of this world.

‘’The staff and students did us proud. It was a great start to Myerscough life.’’ 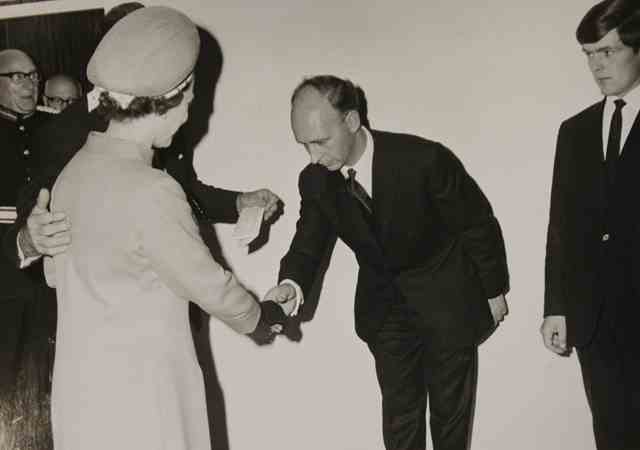 Above: Tony Fox meets the Queen at the official opening of the Bilsborrow campus

‘’When we opened the College, it was around a fifth of the size it is now. We were starting from scratch of course. There was no tradition or events established as it was a brand new centre. We had to establish everything from sports teams, to clubs, to a RAG week, and other enrichment.

‘’Student life was much more family orientated back then. We’d have sports matches against each other and we put Christmas plays on. We had a small bar, as the current Stumble Inn was the sports hall at the time. We did a three peaks walk. It was a great atmosphere and as it was a small intake we knew them all personally.

‘’Nowadays, the College is as big as it’s ever been, and is still growing. I even did a short course here recently! I still have a keen interest in the college and the sector. The College always invite me to events, and I’m also an Honorary Fellow. There are even a few staff who I appointed who are still here today. 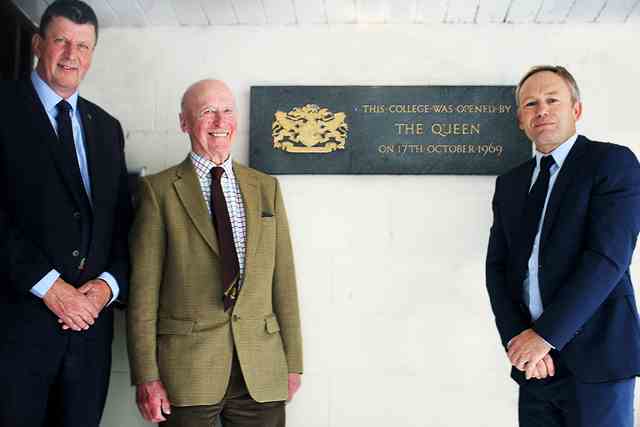 ‘’50 years on from the campus opening, and I’m enormously proud of what has been created. The college was my life. When I started I was lucky at 16 to get in as a student, and the staff were brilliant. They encouraged all of us. They gave me a tremendous start in life and I wanted to put something back in.

‘’I hope in a little way I’ve helped people. I’d just like to be remembered as me. Fair, but friendly.’’