Farriery apprenticeships remain an immensely popular apprenticeship choice. The British are a nation of animal lovers and the chance of working with horses in the open air has a powerful pull. With nearly half a million horse-owning households in the UK, many children have grown up riding horses, and it is a popular hobby. 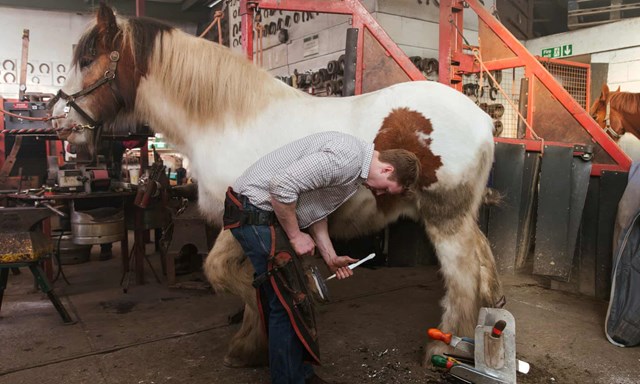 One Myerscough College apprentice looking to forge a successful career in farriery is Alex Bradbury. 22-year-old Alex should complete his four year apprenticeship next year after beginning in June, 2015, working with Huw Dyer, an established farrier in Northallerton, North Yorkshire.

Alex struggled to pursue his dream and get taken on as an apprentice farrier after finishing his A-levels, before finally getting his chance.

Speaking to The Guardian, Alex said: “It’s extremely competitive. I sent out a hundred letters with stamp-addressed envelopes inside and only got one reply.

“It’s what I wanted to do when I was little. I grew up around horses and learned to ride as a child. I used to watch the farrier at work. I did all the sciences at A-levels then was meant to go to university. But I decided I would do what I wanted, so I did my pre-farrier course and got my job with Dyer.”

Farriers need to be registered with the Farriers Registration Council and apprentices often take a pre-farrier course. The job involves preparing horses’ hooves, fitting shoes and working with a hot forge to make the horse shoes out of metal. Hooves are like human fingernails and hair, they grow and need paring back to make them suitable for metal shoeing. The farrier also identifies common ailments of the hoof and adapts shoes for horses that suffer from them. But it can be a dangerous job working underneath a horse.

Alex adds: ‘’I’ve had quite a lot of kicks. I’ve been kicked in the face – I went blind in one eye for about two hours, it wasn’t too bad, I went to hospital and they glued my eye back together and they sent me on my way.

‘’Having an understanding of the psychology of horses is vital. You are quite often in a box with a horse you don’t know, with no one else there for an hour at a time. You have got to be able to pick up on signs if something is not right with them.

Farriers are required to wear protective clothing such as steel toe boots in case a horse stamps on their foot. They also wear safety goggles while working at the forge to protect against sparks. And they often wear a leather apron or chaps (half trousers) to protect their legs against friction from horses’ legs. All employers of apprentices are required to have insurance cover and professional farriers need their own insurance.

While on block release, at Myerscough, Alex learns theory and studies the veterinary side of the job as well as learning how to make different variants of shoes.

When he qualifies later this year, he plans to set up his own business, going out in a van and working for private stables or race horse owners. Most farriers are self-employed.

While most farriers are traditionally men – it was a trade traditionally passed down from fathers – a growing number of women are showing an interest in the profession.

Alex says: “It’s a job that’s hard on your back – you are bending over in a skiing position all day. But I absolutely love it. However, I don’t think you can do it until you are 65 unless you take on apprentices. Many farriers retire in their early 50s.

“I’ll set up my own business one day and go out in my van on my own. I might do a few days a week with Dyer at the beginning until I get on my feet and feel more confident.”