A link between Myerscough College football and Colombia continues to flourish, after two lecturers spent time in the country delivering a special soccer camp. 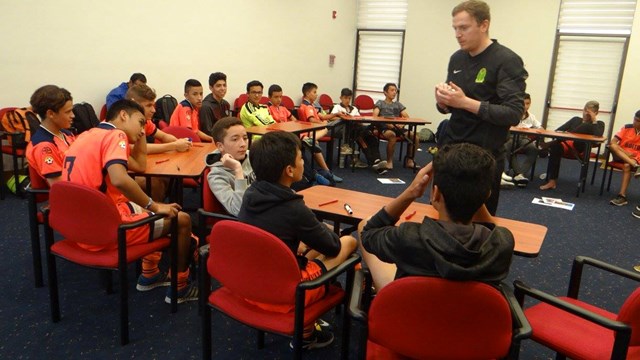 Tutors Andy Collins and Conor Craddock headed to Alset-Bolton, based in Bogotá, to deliver a training camp and sports science classes, along with two coaches from Bolton Wanderers Football Club. In total, around sixty players had the unique opportunity to receive the classes and training.

Alset-Bolton Football Club is a pioneer in Colombia in conducting English football camps, with several thousand young aspiring players going through the programme so far. The aim of the partnership is to eventually give young players the opportunity to study either a one or two year further education course at Myerscough. So far, five Colombian students have come to successfully study with the College, and it’s hoped that more will follow in future years.

At the end of the eight day long camp, a number of grants were awarded to the best players to travel to England in the summer to further their development. Six young players received scholarships each worth several thousand pounds, which will cover the cost of them visiting England in the summer for a 26-day programme of study, training, playing and enrichment. 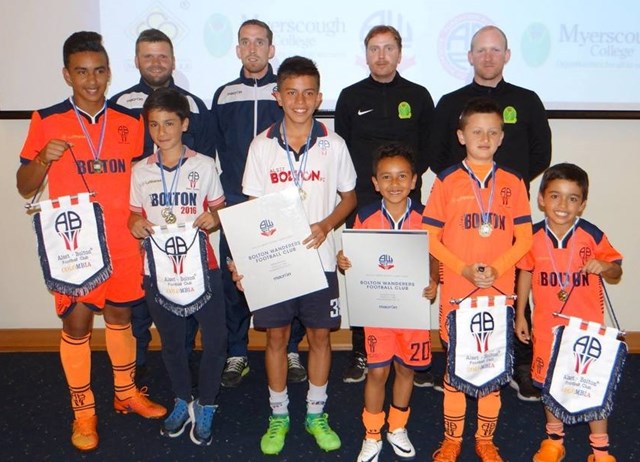 Last year Myerscough welcomed a group of 15 from South America for a two week taster as part of the growing partnership with the country that’s been developed over the last few years.

Andy Collins is a Senior Lecturer in Sport at Myerscough College and said: ‘’I have been over to Colombia a number of times now, creating an excellent link.

‘’We’ve already seen results too from the students that have already come through at Myerscough. One has continued his studies in America, and two others are going to Spain, so we’re giving them a pathway. The qualifications we offer are very highly regarded in Colombia.

‘’We delivered to kids aged from 8-16 teaching numerous subjects such as nutrition, psychology, analysis, anatomy & technical and tactical skills in sport, relating everything to football. We also helped the learners also improve their English skills, incorporating English as a vital component in all tasks and practical sessions.

‘’Interest in the courses from a number of applicants is very high, and we’ve held a number of interviews with individuals regarding coming to Myerscough College. The trip has strengthened the link further and generated a lot of interest in the college.

‘’As a result more than 30 students will be coming from Alset Bolton Football Club this summer for three weeks to stay at Myerscough, to train and play, gaining a unique experience.’’

Alset-Bolton was launched in Bogotá in July 2013 by Malcolm Griffiths. There are now several hundred junior players involved, with regular trips to England organised, where various age groups come and play in organised tournaments. 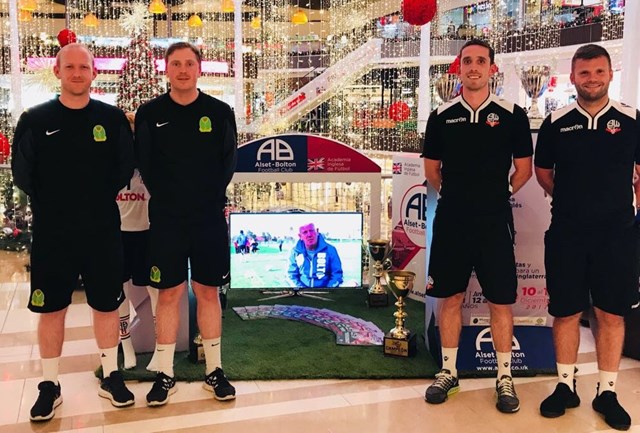 Malcolm says: ‘’Andy (Collins) came across initially to do a camp with us and while he was in Colombia he told us all about Myerscough College and the courses and it grew from there.

‘’Hopefully we can expand in future years not just in football study programmes, but to all the courses offered by Myerscough.’’

Andy Collins is one of a number of highly qualified coaches working at Myerscough Colleges, and has recently completed a Masters Sports Coaching programme, achieving First Class Honours.

Andy adds: ‘’The course has helped develop my understanding of the coaching and teaching environment and I have accumulated a mass amount of new knowledge which I can implement in my current role.’’

The photographs show Andy Collins and Conor Craddock in at Alset-Bolton FC in Colombia, along with Bolton Wanderers coaches, Daniel Clarke and Sam Redshaw.