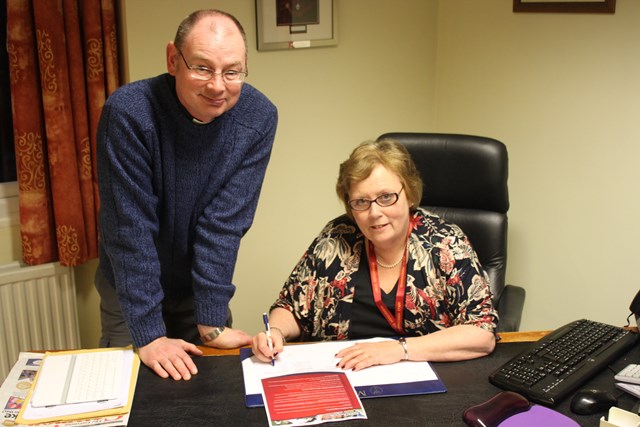 The deal sees Myerscough’s new Chaplain, Reverend Garry Whittaker, working with students throughout the college’s subject areas, but with a focus on sport study programmes. Reverend Garry, as well as being a local vicar in Bilsborrow, is part of Sports Chaplaincy UK, a charity whose mission is to provide and support chaplains in every professional and amateur sport in the country.

Myerscough College has now signed up to an official agreement, a Code of Practice which sets out and formalises the relationship between the College, the Chaplain and his role, and the charity. Reverend Garry Whittaker provided a similar service for rugby league club, Rochdale Hornets, before moving to the area earlier this year as part of the Fellside Team Ministry, which serves five local parishes.

Sports Chaplaincy is now commonplace in professional football, rugby union, and rugby league, as well as other sports, and its provision is increasing at grassroots level. The vast majority of a sports chaplain’s work is confidential, and covers sensitive matters such as drug or alcohol misuse, and mental health.

Reverend Garry says the use of faith in sport is becoming increasingly important, but the service is open to anyone who feels they need help: ‘’So much sport goes on at Myerscough College and this partnership will bring extra high quality extra support to students and staff who might need someone. As Sports Chaplaincy UK are a national organisation the agreement enables us to access any extra help that may also be required based on somebody’s individual circumstances.

‘’But I’m here for everyone – that’s all students and all staff across all the college’s subject areas. With sport being such a large part of Myerscough’s make-up it makes sense that we focus around sport.

‘’If a student or staff member is identified as needing confidential support there’s now a formal mechanism in place to give them someone to talk to, face to face, based right on their doorstep. This is regardless of whether they have faith or not. It’s a non-judgemental, highly confidential role. I’m a listening ear. Sometimes you need a friendly face and hopefully people who access the service may open up to their problems when they might otherwise have been afraid to ask for help.

‘’Chaplaincy is now very common in sport. Most professional rugby and football clubs already have a chaplain and its growing elsewhere as people see the need for the support.

‘’I’m on the doorstep as and when required. I was chaplain to Fiji in the recent World Cup and working at this level helps gain trust and it makes the service more credible.

The Sports Chaplaincy Agreement adds to the College’s already substantial student and staff support network, which includes an excellent range of welfare services provided by a dedicated advice and guidance team. This includes a specialist Inclusive Learning team providing a flexible response to students with disabilities or specific learning difficulties, counselling, careers guidance and childcare.