Myerscough College has joined forces with Lancaster City Football Club for the launch of a brand new Academy programme. 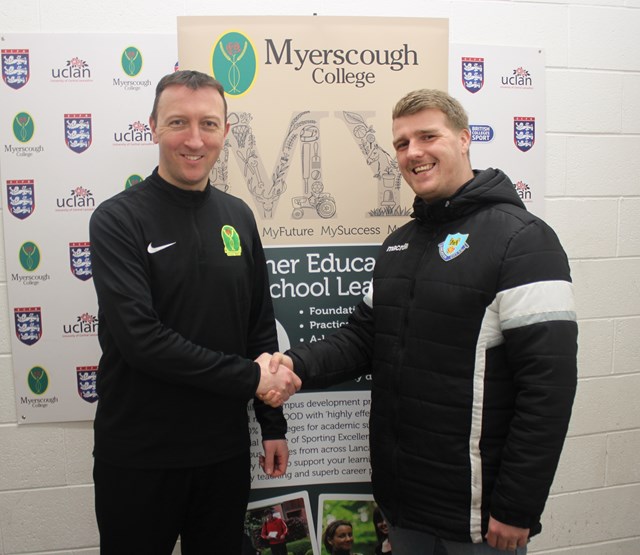 Due to start in September, the Academy will offer a post-16 programme, combining high class football development and academic provision, and will see the club work in partnership with Myerscough to utilise the state-of-the-art football and sport facilities at the College’s Bilsborrow campus.

Andy Collins, Senior Lecturer in Fooball and Programme Leader, said: ''The aim of the Academy will be to build on Myerscough’s proven track record of producing footballing talent that have played at a high level in both the non-league and professional game.

''The Academy will see the players blend a BTEC academic course at either Level 2 or 3 with their footballing progression, training and participation in matches for Lancaster City and in the College League system, and also in the FA Youth Cup.

''The bulk of the course will be run from the exceptional facilities at Myerscough College with offshoot activity and some competitive fixtures taking place at Giant Axe.''

Phil Brown, Lancaster City FC first team manager, said: “The Academy is the next logical step for both the club and our provision at Myerscough.

‘’It will provide a pathway to ensure young players are offered the opportunity to play for Lancaster City FC, at the same time as gaining a qualification.’’

Lancaster City General Manager, Shane Hudson, said: ‘’The track record Myerscough has for developing talent and players who can step up to the level required and beyond is phenomenal.

“We are extremely excited to announce this partnership, the Academy and yet another vital strand to the club’s player pathway and development strategy, and we look forward to seeing the final building blocks now fall into place ready for commencement in September.’’

Myerscough College already has a long standing history of producing football students who have played for Lancaster City, before then entering the professional game, including the likes of current Football League players Joe Bunney (Northampton), Alex Kenyon (Morecambe) and Rhys Turner (Morecambe), as well as striker Jordan Connerton, who went on to play for Crewe as well as in Scandanavia, before returning to Lancaster as their top scorer in City’s Evo Stik League Division 1 North title winning campaign in 2016/17.

In the current 2017/18 season, current Myerscough students including striker Hannu Tam, have broken through into the first team squad.

The partnership will also see links being strengthened with the Isle of Man FA, with Myerscough being able to offer students who wish to be part of the Academy programme the chance to live on campus, and be part of the exciting new venture.

There will be a number of Advice Evenings in the coming months for potential students and parents to find out more about the programme. The first ones will be held at the Netbusters Bar at Lancaster’s Giant Axe stadium (West Road, LA1, 5PE), on Tuesday, March 20th and Tuesday, April 12th.

To register your interest or get more information on the Academy, please email General Manager, Shane Hudson on generalmanager@lancastercityfc.com, or contact the Course Enquiries team at Myerscough College on (01995) 642222.

You can read more about the Academy here: