A Myerscough College learner has been honoured with a national accolade at the prestigious Institute of Groundsmanship (IOG) Industry Awards 2016.

In an almost exclusively male dominated industry, Katie Croft recently completed her Level 2 Apprenticeship in Groundsmanship at Manchester City Football Club and was named winner of the Toro Most Promising Sports Turf Student of the Year at a prestigious Oscar-style at the IOG Industry Awards dinner at the National Conference Centre, within the National Motorcycle Museum, as part of the annual SALTEX exhibition.

It was a category that Myerscough College dominated, with fellow apprentice Daniel Bradley and degree student Elliot Wilson also nominated for the award. Elliot graduated from Myerscough this summer with a first class BSc (Hons) in Sportsturf Science and has recently entered the industry as a consultant. Daniel is currently an intermediate apprentice and was another recruited by the College’s Employer Services team. 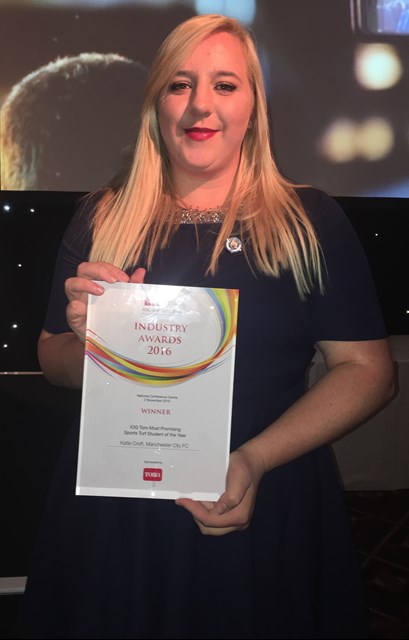 Now in its eighth year, the awards acknowledge the high standards achieved by volunteer and professional grounds teams as well as individuals at facilities ranging from grassroots to professional stadia level, plus contractors within the industry.

Lee Price, Employer Services Manager at Myerscough College said: “This is fantastic news for the College and congratulations to Katie.

‘’Amazingly all three category finalists were Myerscough College learners and were all extremely complimentary about their courses and the tutoring they had received.’’

Katie said: ‘’I’m absolutely honoured to win Toro Most Promising Sports Turf Student of the Year. I'm over the moon and I hope I can help more women into our industry!’’

IOG Chief Exec, Geoff Webb, said: “This year’s entries broke all records with more entries per category than any previous year. The judges, all of whom are groundsmen, were particularly impressed with the quality of submissions. Indeed, each year the quality of applications improves.

“Anyone nominated should be recognised regardless of whether they make the final stage. It just shows the range and dedication of those working at both professional and volunteer level, day in and day out. The awards cover a diverse range of categories where quality truly shines through.”

The awards’ judging process recognises achievement, innovation and fresh thinking as well as examples of best practice from the leaders in the world of groundsmanship.

At last year’s awards, two Myerscough College learners were recognised, as Ryan Powell and Ron Mason were both named as winners in the Young Groundsman of the Year and Horse Racing Grounds Team of the Year categories respectively.