A Myerscough College cricket tutor has been named as the England & Wales Cricket Board (ECB) Coach of the Year 2019 for Lancashire. 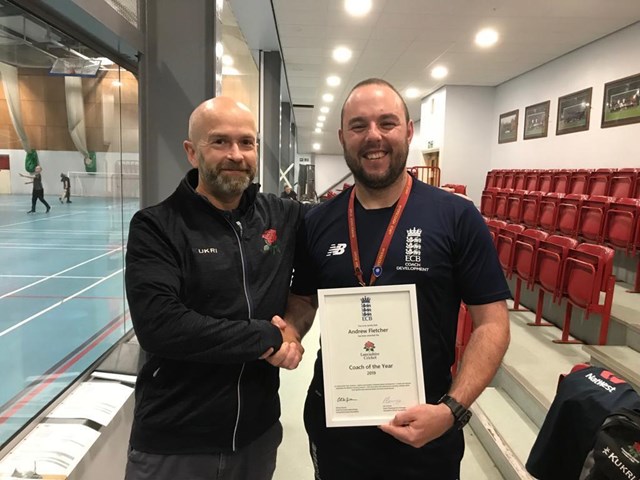 Andy Fletcher will now contest the national Coach of the Year title after being recognised for his efforts within the county, which in addition to being Course Leader, Foundation Degree in Cricket Coaching at Myerscough’s Preston centre, includes going the extra mile to inspire junior players at grassroots level.

This includes work with the junior section at local side, Garstang CC, where Andy is Head of Junior Coaching and Coach Development. Here, he works with the club's ECB qualified coaches to deliver high level coaching to all age groups, increasing parent engagement and supporting coaches develop their own practice.

Andy is also a Head Coach at the Andrew Flintoff Cricket Academy, working in conjunction with, and supervising several coaches in the delivery of high quality cricket coaching in the ‘Freddie way’, whilst planning and organising the week's coaching to create the unique atmosphere that AFCA academies are known for.

On top of all this, Andy is an ECB Coach Educator, with the Lancashire Cricket Board, supporting the delivery of Coach Education courses across the county.

Andy said: ‘’This award is a nice surprise as I certainly wasn't expecting it!

‘’My basic objective is to facilitate the enjoyment of sport, regardless of the activity itself. If a young player has enjoyed themselves, they are more likely to return in future and to continue an involvement in sport.

‘’As a cricket coach, I am committed to supporting players develop their basic and higher level skills, allowing them to compete at the highest level possible. I aim to create energetic and stimulating environments that facilitate learning and an enjoyment of the game whilst allowing players to build their confidence through the personal success of overcoming challenges.’’

The ECB’s annual reward and recognition scheme says thank you to people that have made a significant contribution to cricket, coaching and the development of coaches. The awards are a fantastic way to acknowledge and reward coaches who have made a particularly positive impact in the game and deserve recognition for it.

The Coach of the Year is awarded to a person who succeeds in supporting individual player development, creating and delivering enjoyable and effective coaching sessions, and uses innovation and inspirational coaching methods which have significantly improved player and team performances.

County Cricket Boards judge the entries, selecting an overall winner for each category. As county winner for Lancashire, Andy will be invited to an ECB Coach Awards event later in the year. A national winner and two finalists for each category will be selected by an ECB panel.

For details of the range of cricket study programmes available at Myerscough College and University Centre at both further and higher education level, CLICK HERE