A plaque has been unveiled to commemorate Myerscough’s dear colleague, Dr Lorraine Allan, Head of Equine, Farriery and Veterinary Nursing, who passed away earlier this year.

Her children, Helen and Robert, and former colleagues, gathered at Myerscough’s Veterinary Nursing Centre at the College’s main Bilsborrow campus to pay tribute and reveal the plaque, which dedicates the centre to her, and will also act as a permanent memorial to Lorraine, and the work she did with Myerscough.

Lorraine’s work with the College spanned four decades, and included establishing a veterinary nursing course at what was then Lancashire College of Horticulture and Agriculture, before the rebrand to Myerscough College in 1993, and helping to establish the first block release RVN training course in the North West. Over the years, Lorraine played a key part in the making the College's Veterinary Nursing department arguably the most successful in the country.

Speaking at the official unveiling of the plaque, Alison Robinson, Chief Executive and Principal of Myerscough College, said: ‘’We’re delighted that Helen and Robert could join us for this special occasion.

‘’It was really important for our veterinary nursing and farriery staff to create a permanent memory of Lorraine. We all have very fond memories of her and I could share so many stories about her time at Myerscough.

‘’It’s also not just about the people here today, but also of the future. New students, won’t have known Lorraine, so we wanted that permanent reminder of her in the form of the plaque. 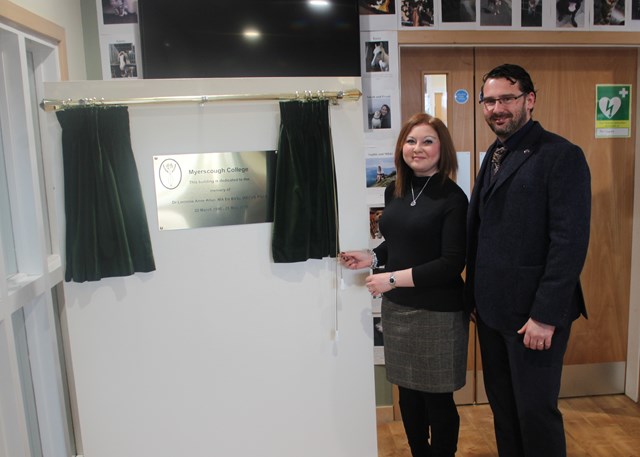 Alison added: ‘’Lorraine’s death was an incredible shock to us.

‘’She is very sadly missed by us all. Lorraine had been involved with the College at the Hutton campus doing voluntary work before she joined our Myerscough team nearly thirty years ago. She had therefore worked with some of our staff for very many years and was Myerscough through and through.

‘’Despite being of retirement age, Lorraine was not ready to hang up her boots and was still ready for new adventures. Lorraine played a leading role in supporting not just Equine, Veterinary Nursing and Farriery but was looking forward to playing a significant role within the veterinary provision and expansion in the future.

‘’Lorraine loved her job, her colleagues and the Veterinary and Veterinary Nursing professions and was a brilliant advocate for Veterinary Nursing, Equine and Farriery. She would always fight for her team’s corner whilst being aware of the wider picture, being open, honest and incredibly caring to her team and others around her. She had a brilliant sense of humour and a huge warm heart. Lorraine was one of our most respected and trusted staff and managers and is a huge loss for our whole Myerscough team.’’ 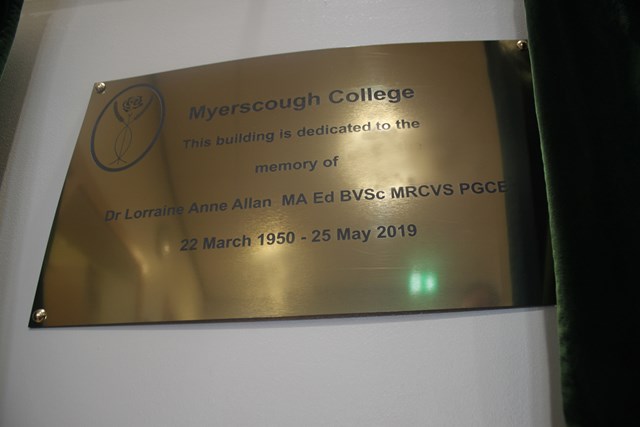 Lorraine has been described as an inspiration, a dedicated professional, and a true master of her profession, in a career where she educated thousands of veterinary nurses over the years, and laid the foundations for part-time and flexible RVN training courses over her decades in the profession.

She graduated from the University of Liverpool in 1975 and went on to obtain her assessor awards, a certificate and post-graduate certificate, and a master’s in education.

She took up a position at Cambridge vet school lecturing on anaesthesia. She met her husband Robert while working at Holroyd’s in Blackburn, and the couple went on to run practices together and raise a family, during which time Lorraine became the official veterinary surgeon at British Beef in Bamber Bridge, before later beginning her long career at Myerscough.

The photographs show Lorraine’s children, Helen and Robert, unveiling the plaque, along with Chief Executive and Principal, Alison Robinson, and Head of Veterinary Nursing and Farriery, Claire Bloor.