Work is well underway on a new, state-of-the-art centre on Myerscough’s Lodge Farm. 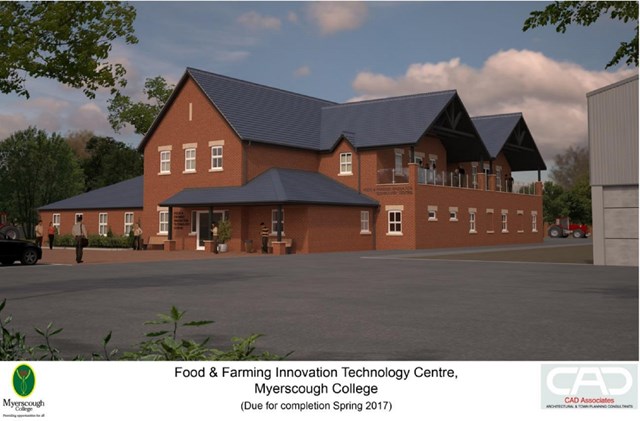 The FFIT (Food & Farming Innovation & Technology) Centre will be a sector leading facility of excellence for industry training. This major flagship build for agriculture and associated courses should be completed for the start of the academic year in September, 2017. The project is supported by the Lancashire Economic Partnership (LEP).

Once complete the centre will be a two storey building and will incorporate specialist teaching as well as demonstration and research facilities including a teaching laboratory, soil laboratory, instrumentation room, production development kitchen, as well as a conference room, general teaching rooms, offices, a dining area and changing facilities.

The ambitious project also sees the building of a Livestock Innovation Centre, which will provide new livestock production facilities with embedded technology to promote precision farming practices. There’ll also be additional silos and associated stores as well as alterations to existing buildings, and a field trial area utilising farm land immediately adjacent to the site.

Work is now underway on the first stage - the Livestock Innovation Centre - which will be located behind the current farm buildings on site.

The build began in February and has so far seen the beginning of the construction of the new beef unit, slurry stores and silage clamps. The old straw barn on the site has been dismantled and a new covered silage clamp has been erected, which includes separate storage of some crops. It’s already in use with supplies being stored there ready for feeding in October. Two new slurry stores have been erected and are also now in use.

Once complete, a state-of-the-art internal handling system and incorporated technology will operate at the centre to include a hydraulic crush and hydraulic shedding system with facilities for cleaning and washing animals. Electronic weighing and recording will also be incorporated. An automatic ventilation system will be fitted to the sides of the beef unit, while CCTV will be installed to allow the monitoring of animal behaviour.

An important feature in the new centre is the inclusion of six Growsafe feeding bins to one of the pens which will allow feeding trials to be carried out. The Growsafe system will electronically monitor and record how much each animal eats, at what time and for how long.

Once the new beef unit is completed in September and operational then the existing unit will be dismantled and construction of the new main Food, Farming and Innovation Technology centre building will be commenced with a planned completion date of July 2017.

Craig Thompson, Head of Agriculture at Myerscough College, said: ‘’These are changing times for the agriculture staff and students at Myerscough and we are really excited watching the new farm buildings develop.

‘’They will be an invaluable addition to the farm resources and will really enhance the learning experience of our students. The demonstration of cutting edge technology combined with research opportunities will service the needs of both our students and the wider agriculture sector.’’

John Wherry, Deputy Principal Resources at Myerscough College, said: ‘’The project will enable the College to make a significant contribution towards the realisation of Lancashire LEP’s Strategic Economic Plan.

‘’Myerscough already has a significant network of local businesses including more than 6,000 farmers, 80 small food producers who are members of college managed Made in Lancashire and around 1,200 employers who the college interacts and delivers training to in any given year.

‘’The project will ultimately result in the creation of a centre of excellence to lead the development and adoption of precision farming techniques within the livestock and grassland sectors. The facility will also provide resources to support the development of local food products. As the project will be delivered on the College’s existing Lodge Farm site it will therefore be integrated into existing farming activities and directly support curriculum delivery on the farm.’’

Meanwhile, further campus developments are also well under way at Myerscough’s main Bilsborrow campus as well as at other centres. The College’s new sports hall – which will be called the Myerscough Sport High Performance Centre – will open for business later this month. The centre will house basketball, volleyball, netball and badminton courts as well as additional strength and conditioning facilities.

Work is also due to get underway shortly on new student accommodation, while at the College’s Merseyside campus at Croxteth Park, an expression of interest has been submitted to Liverpool City region’s LEP for financial support to create a new Animal and Equine Centre. Outline planning approval has already been granted with Myerscough now in the process of a full application. If successful, this project would have a target completion date for the new academic year in 2017.

These projects will complete Myerscough’s current capital plan. Work will then begin later in the summer to identify potential projects for the 2017-2022 capital plan and to assess their contribution to teaching and learning, the wider student experience and value for money.