Myerscough College is all geared up to increase its provision of the sport of futsal after receiving equipment as part of a national scheme backed by the Football Association. 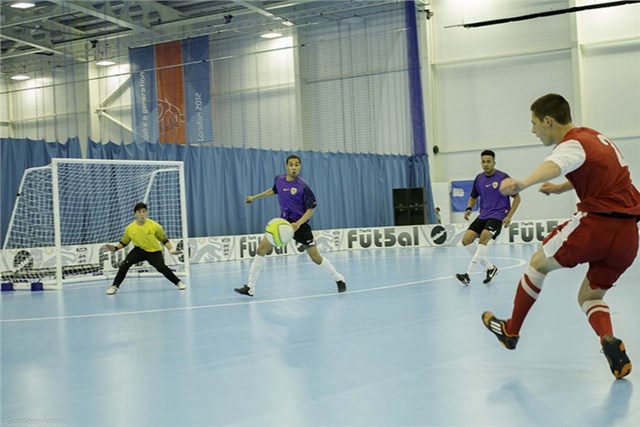 Futsal is a variant of ‘normal’ football that is played on a smaller pitch, which smaller goals. It is played between two teams of five players each, with substitutions permitted during the game. Futsal is played on a hard court surface and unlike 5-a-side, walls or boards are not used. The other major difference is that futsal is played with a smaller ball with less bounce than a regular football, to create an emphasis on improvisation, creativity and technique as well as ball control and passing in small spaces.

The equipment awards are designed to adapt existing sports halls, playgrounds and other hard surface facilities to make them futsal-ready. The national scheme costs £300,000, which is funded by The FA and delivered by the Football Foundation.

The sport of futsal is an exciting, fast-paced game, is played across the world and is officially recognised by both UEFA and FIFA. Regarded as an important and growing game, it is hoped that the provision of equipment and courses will lead to the development of more futsal players, leagues, competitions and facilities across the country.

As the nature of the game places a large emphasis on technical skill and ability in situations of high pressure, it is subsequently an excellent breeding ground for football competencies that can be translated into the 11-a-side format of the game.

Michael Skubala, England Futsal Head Coach, said: “A big well done to Myerscough College for securing a Futsal starter pack – they have a bright future ahead of them now!

‘’We want to get more people playing the sport for the love of it and who knows; perhaps we’ll see some future international players unearthed as a result. Futsal is growing all the time and The FA, with the help of the Football Foundation, is dedicated to increasing its importance and popularity further for all.”

Myerscough’s football students have successfully played futsal for a number of years, and in recent times have won a number of titles including the national under 18’s Futsal Championship for two years in a row.

As well as delivering the futsal scheme, the Football Foundation delivers Grow the Game and also the Premier League & The FA Facilities Fund on behalf of the Premier League, The FA and the Government, through Sport England. Since 2000, the Foundation has supported over 15,000 grassroots projects worth more than £1.4bn.